Call Us: +44 1202 203656
close
PLEASE LOGIN OR REGISTER WITH THE SITE TO CREATE YOUR WISHLIST Login Register
Home Destinations Morocco Marrakech

Marrakech (French) or Marrakesh (English), known as the "Red City" or "Al Hamra," is a city in southwestern Morroco, near the foothills of the Atlas Mountains. Spring and autumn are the best times to explore this fantastic city, with temperatures averaging 20-25°C. Outside of these seasons can you can expect to experience either extreme cold or extreme heat. Marrakech is served by Ménara International Airport (RAK) and a rail link to Casablanca and the north.

Marrakesh is nestled at the foot of the Atlas Mountains, the ancient capital of the Almohades and today is still a refuge blossoming in the middle of the desert. The mightiest of kings fought for it, a line of dynasties inherited it, commissioning sages, craftsmen, architects, painters and sculptors to build magnificent palaces, mosques, gardens and riads.

Marrakech has the largest traditional market (Souk) in Morroco and also has the busiest square in the entire continent of Africa, called Djemaa el Fna. Its spectacular setting against the snow-capped mountains add to the world of frenzied motion, where jugglers and storytellers jostle for position with snake charmers, magicians and acrobats. Your nose will guide you to row upon row of open-air food stalls whose pungent smoke fills the air with mouth-watering aromas. The square bustles with dancers and musicians by day; and food stalls by night, becoming a huge open-air restaurant.

Like many North African and Middle Eastern cities, Marrakech comprises both an old fortified city (the médina) and an adjacent modern city (called Gueliz). Adventure awaits at the doorstep in the medina (old city), with its fondouks (artisans' workshops), seven zaouias (saints' shrines) and qissaria (pedestrian street) stalls ladling up steaming bowls of snails and sheep's head soup. There is plenty of shopping to be done in Marrakesh; the souks (Markets) are filled with craft items and if it’s too hot on a summers afternoon, Guéliz has some very upmarket innovative and chic boutiques with air conditioning. Close to the Dar El Pacha, in the Bab Doukkala neighbourhood, you will find plenty of antique dealers.

There are two big annual events that draw the crowds to Marrakech; the big Gnaoua and World music festival in Essaouira (early June) and the film festival in the Red City (late September). At the Gnaoua event surf groupies and post-hippies get together with ethno-beat enthusiasts and local gentry. Concerts are open-air, the historic ramparts of Essaouira making a fitting backdrop. Marrakech’s film festival is an opposite occasion altogether, stars and starlets, royalty and rogues rub shoulders with the big cinema names from the South. Alongside the round-tables for cinéastes, open-air screenings of Bollywood film draw the crowds to Jemaâ el Fna. Marrakech also has a big July folklore festival, traditionally a showcase for Morocco’s huge range of traditional music and dance. Long-established traditional festivals or moussems are generally held in late summer and are worth catching.

Marrakech is winning culinary credentials, why not try the blow-out Marrakchi dining experience in all its six course splendour? After harira soup or a selection of salads, you’ll be served a ‘yellow’ dish, possibly chicken m'qalli, couscous, bastilla (filo-pastry pie with pigeon, egg and almonds) and possibly steamed lamb. Afters may include jaouhara (fried filo pastry with a cream), kab ghzal, ‘gazelle horns’ or a palate-cleaning orange and cinnamon salad. In old Marrakech, options range from street-side barbecues to diet-destroying gourmet banquets in a palatial setting. A new breed of boutique restaurants serves a makeover version of Morrocan food: all the staples with Levantine, Italian and Gallic grace-notes. Service will be kind and attentive and the freshness of the ingredients makes for fine-flavoured food. Minimise Location Map
Read More
close
VIEW ACCOMMODATION 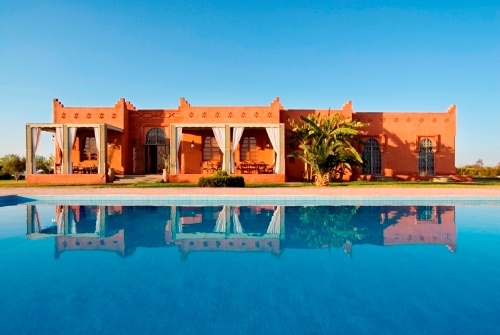