The Comunidad Valenciana (Valencia Region) has three provinces: Castellon, Valencia and Alicante. Spain’s Costa Blanca runs from Denia in the north to Alicante in the south, it is filled with beautiful luxury villas, most with stunning sea views. The area has a temperate climate meaning that the change between the summer and winter weather is relatively moderate, with an average of 320 days sunshine a year....not surprising why it is so popular! Much of the Valencia area is known as the ‘Garden of Spain’, with greenery all year round, it is filled with palm & pine trees framing the vines and fruits growing on shelved hills that make their way to the coast – in some areas it could easily be mistaken for Tuscany. The coast is dotted with unspoilt Spanish villages, cliffs, and tranquil beaches and coves - a very pretty setting which is popular with visitors looking for the more relaxing side of Spain in a luxury villa.

The Valencia Region is a fantastic walking and rock climbing area, with well-marked paths through fragrant scrub and offering breathtaking views. Other activities include horse riding, tennis, pamper days, sailing, snorkelling, diving, water sports, exploring caves and much more with plenty of interesting towns to visit and plenty of local markets selling everything from antiques to fresh seafood. In addition the region boasts many established and several new 18 hole golf courses dotted inland and by the coast. It is home to one of the biggest water parks and Theme parks in Europe, (Terra Mitica). There are some of the largest Marine Parks in Europe clustered within the boundaries of the Northern Costa Blanca, excellent for diving and snorkelling.

Valencia City, the region’s capital, is famed for its history and culture, and it has some of the best beaches in Spain! The city is a vibrant mix of old and new with its Historic District and magnificent cathedral. Valencia also has many museums including The Museum of Fine Arts, Museum of Valencia and many beautiful parks and botanical gardens. The cosmopolitan city becomes alive at night, boasting restaurants and nightlife to suit every taste.

Heading down the coast, you will find several unspoilt and exclusive coastal towns and villages. The bustling town of Denia has a spectacular 11th century castle which dominates the town, long stretches of sandy beaches, an exclusive Marina and excellent selection of shops, beach front restaurants and bars....what a perfect way to spend an afternoon. From here you can catch car ferries to Ibiza and Majorca.

South of Denia, you will find Javea, (also spelt Xabia) which is made up of three areas:
1. The old town ‘The Pueblo’ with its 12th Century Church, Inglesia San Bartolome and cobbled streets.
2. The old port, a quaint, working fishing port with many good beachfront restaurants.
3. The new town ‘El Arenal’, with its wide expanse of safe sandy beach, popular with families, and a promenade with restaurants and bars on the beach, here you will find an evening street market in the summer months.

The exclusive former fishing village of Moraira is now one of the richest areas in Valencia. It has a lovely town filled with designer shops and over 150 international restaurants to suit every taste and budget – from Michelin-starred to more of a traditional holiday fayre and plenty in between, its hard not to be impressed by the range and quality on offer at very good prices. There are numerous sandy beaches and picturesque coves to choose from and exclusive luxury villas set in the lush surrounding hills with the most amazing views over the town and sea beyond. Club Nautico, a vibrant Yacht marina makes for a great evening with food and entertainment. There’s a colourful Friday market which is well worth a visit also!

Jalon or Xalo is further inland from Moraira, it is situated in the beautiful Jalon Valley, an area well known for its fabulous wine, olives honey and citrus products. Visit for some wine tasting in one of the Bodegas, stroll around a variety of shops selling local produce and an old square with an open market on Tuesday mornings. Saturday mornings along the riverbank you will find the very interesting antique bricante ‘Rastro’ market.

Take the windy but very pretty coastal road from Moraira to Calp. Calp is known for its long sandy beaches with clam waters and the impressive ‘Penon de Ifachis’ rock which is a wildlife and bird sanctuary. Down by the marina there are several open restaurants offering an array of different seafood options enticing you in with sangria and canapés to try! It has a great atmosphere and lovely views of the sea and fishing boats. 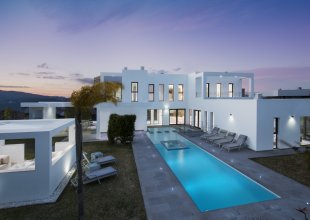