The beautiful region of Dordogne is located in south west France between the Loire valley and the high Pyrénées and is named after the magnificent river that runs through it. Locals refer to the region as the Périgord, a name used for the region before the French revolution; the region changed its name to Dordogne in 1790.

There are four Périgords in the Dordogne, the "Périgord Verte" (Green Périgord) with its main town of Nontron, offering green valleys and flowing rivers and streams. The "Périgord Blanc" (White Périgord) is situated around the regions capital of Périgueux; here you will find limestone plateaux, wide valleys and rolling meadows. The "Périgord Pourpre" (Purple Périgord) capital is Bergerac, the home of Cyrano and is the wine region, with full bodied reds and sweet white Monbazilacs, a famous desert wine. The "Périgord Noir" (Black Périgord) overlooks the valleys of the Vézère and the Dordogne, where the woods of Oak and Pine give it its name. Sarlat is its medieval capital, where a maze of ancient lanes and stone buildings have now been declared a living museum.

Feast into some interesting culinary delights, considered to be home of some of the world's best Truffles and foie gras, two of the most sumptuous tastes! You will also find lots of duck and goose cooked here, including specialities such as "Demoiselle" (the whole bird grilled over a wood fire). And of course, the supplier of almost half of France’s fine wine!

Dordogne is known to have around 1001 château's in the region so there is more than enough to keep the historian occupied here! Explore the Gallic dry-stone huts (bories), Roman remains, Romanesque churches, caves and rock shelters (cluzeaux), fortified towns known as bastides, and the many interesting French round towers. Wander around the medieval towns of Domme, Belves, Monpazier and Sarlat; enjoying a picnic in the forests, gardens and unspoilt countryside.

The Dordogne is a tourists paradise for many reasons, the beauty of the region is unrivalled, rivers cut through limestone allowing incredible cliffs that have been built into and around for thousands of years. The immense system of caves below the earth show art so old it's difficult to imagine the talent needed all those years ago. Some visitors are attracted to the region purely because of the prehistoric caves, there are many in the region to explore, including Les Grottes de Maxange, newly discovered in 2000 at Le Buisson de Cadouin, these caves have several very unusual formations in addition to the stalactites and stalagmites - formed by capillary action rather than dripping water, these curious formations twist and turn in all directions. Grotte de Combarelles is situated 3km north-east of Les Eyzies and contains engravings of animals and some human figures. Grotte de Bara Bahau is a cave system 2km north of Le Bugue, with lots of animal pictures carved into the walls.

Enjoy the Dordogne any time of the year, in spring, when the air is filled with the scent of fruit trees in full blossom along with the countless species of orchids and other wild flowers. In summer, bathe or canoe in one of Périgord's lakes or ponds and cool off by discovering one of the region's many caves or castles. In winter Périgord's architectural heritage comes out from behind their leafy hiding places. As Christmas arrives, markets sell local fresh truffles, cèpes and foies gras so prized by epicures from all over the world.
Read More View Location Map
close
VIEW ACCOMMODATION 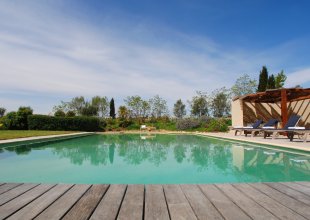